Inside a Secret Mansion in Downtown San Jose

It's impossible to walk by this architectural marvel, crumbling right before your eyes, and not want to know it's story, to rescue it, to see it live again. This beautiful and mysterious building is Casa Jiménez. Built in 1905 it was designed by it's original owner, lawyer and diplomat Manuel Francisco Jiménez Ortiz. It is one of the only remaining Art Nouveau style buildings in the city, and it's a feature on our walking tours.


The building is currently under disputed ownership, or rather it's stuck in court. It is on the Ministry of Culture's protected Heritage list and therefore its architectural integrity must be maintained in remodeling, but at this point, it simply needs to be saved.


Barrio Bird did have the chance to sneak inside and snap some photos. Here is a look inside the torn apart building, as well as a photo of it's original glory. 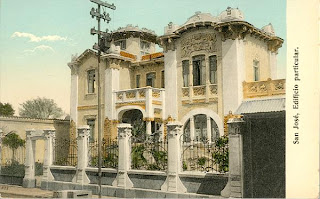 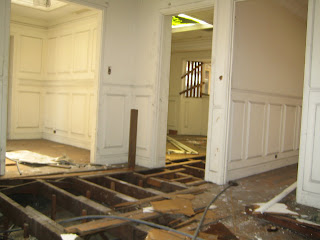 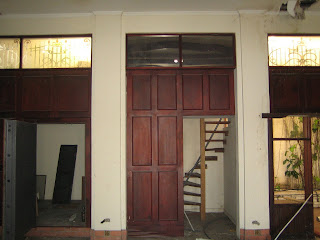 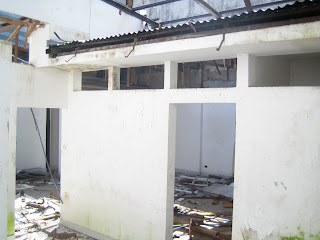 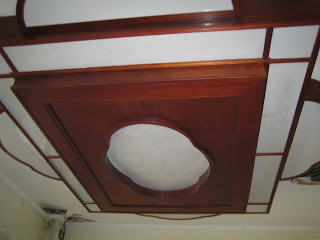 Barrio Bird offers walking tours of San Jose. If you are a visitor or have lived here for some time, there is always a new way to see the city. View tours or make a reservation by emailing barriobird@gmail.com or calling 8926-9867.
Posted by Stacey at 6:33 PM 12 comments 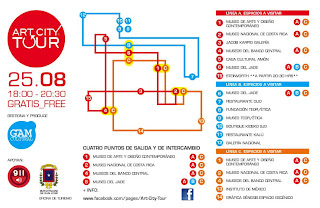 Getting Serious About Design in San Jose, Costa Rica

The launch of a new designers' association in Costa Rica is a very important step towards what I am calling a cultural revitalization that is going to explode exponentially over the next two years in San Jose.
The Asociación de Diseñadores de Costa Rica, supported by the Ministry of Culture, was inaugurated last night at La Aduana, using the new tech and art facility on the east side of the building.


The group's intent is to support designers of all kinds from Costa Rica. About 95% of designers are small business operations, and this will provide a platform for workshops, peer-to-peer information sharing, and inspiration. I hope this group will also become a force to launch costa rican designers onto the global stage. 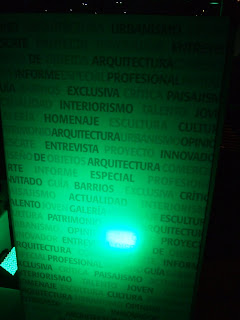 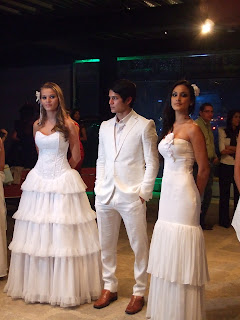 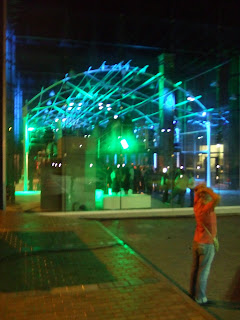 President Laura Chinchilla, gave her 100 day - and rest of term address/goals presentation this past Mon. night in the National Auditorium at the Children's Museum. Delivered to a packed audience, she reviewed what the goals and priorities are for Costa Rica at large. I'm going to do my best to interpret and predict what that might mean for downtown San Jose.

95% Renewable Energy Use & One of First CO2 Neutral:
Regarding San Jose, one could only hope this relates to cars and use of gasoline. I don't have much background on current fuel usage, but it would be great to see more hybrid/electric cars on the road and maybe a few charging stations. It is stated in her goals to better structure and organize the transportation routes for the greater metropolitan area (GAM). Anyone with more specifics on this topic feel free to write, barriobird@gmail.com. Additionally, car exhaust testing and regulations would greatly improve the atmosphere in the city if someone didn't have to fight the many fumes from cars, buses and trucks.

Safety
In San Jose it seemed the day Chinchilla took office, more officers took foot in the downtown area. Having increased the force just 2 weeks ago with the graduation of 700 officers it seems she can reach the term goal to increase the national police force by 4,000. Unfortunately, the minister of security is asking for thousands more to combat crime in Costa Rica. I have been impressed however, with the forward motion of safety camera installations and increase in numbers of officers walking around downtown. How much it all will help no one knows. Recent incidents such as these two cops under investigation for letting a trannie sell drugs, is a reminder that aspirations and real world don't always connect in the city. Overall, I still say San Jose is a very safe place for non-idiots.

Other
Many of the President's remaining goals speak to education, and connectivity via telecommunications infrastructure and road/rail/air. These goals, in addition to helping unemployment and poverty, will probably be acheived by work outside the GAM. One goal is to have 85% of schools connected to the internet. Overall, the improvements to San Jose will continue to come probably more from a municipal level. Let's get ready for a mayoral election! 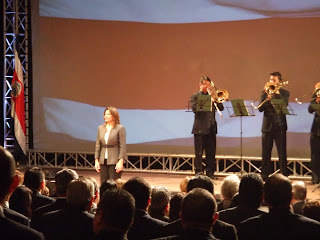 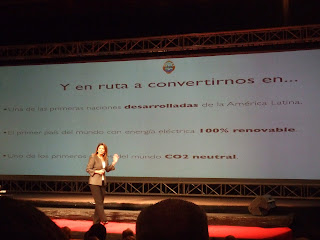 Visitors be advised, Mother's Day in Costa Rica might be the most sacred holiday. So sacred, they still permit alcohol sales!
I'd like to take this moment to invite visitors and expats to take advantage of low Sat. & Sun. traffic and great deals at fabulous restaurants, to explore fabulous downtown San Jose! Costa Rican? Bring your mom downtown for a change. There's much to see and delicious treats to enjoy. Shoot, maybe even take a walking tour on this fine weekend.

Open 11-7 all guests will enjoy a free coffee with each purchase. The Arepa is a venezuelan pita meets pupusa with savory meat mixes inside. I recommend stopping by for a breakfast arepa, fresh juice and free coffee!
Cafe Moro
This meditterean restaurant is located within a historic, moroccan style castle. Tomorrow Cafe Moro will feature these special plates and pricing, and at 8:30 a belly dancing spec-tac-u-lar will take place!!
1. Tomato and caper bruschetta with grated eggplant and roasted vegetables, 3500 colones
2. Hummus with eggplant and greek salad, 3500 colones
3. Falafel, tabouleh and dolmade, 3500 colones
4. Kebab Plate- chicken, steak and lamb, 4400 colones
5. Chees Plate - cheeses from Volcan Irazu, 2,200 colones
6. Desserts - fruit tart, creme brule or chocolate mousse, 4,800 colones

Sunday
Cafe Kalu
MIMOSAS!! Free for moms at Cafe Kalu. Everyone else enjoy brunch and lunch, and mimosas too. Open at 9:30 this will be a perfect way to spend Sunday. Children under 12 eat free.
Roma Caffe
Open at 7 a.m. Italian eatery, Roma Caffe will be serving up all sorts of 'surprises' for moms. I love surprises!
Barrio Bird offers walking tours of San Jose. If you are a visitor or have lived here for some time, there is always a new way to see the city. View tours or make a reservation by emailing barriobird@gmail.com or calling 8926-9867.
Posted by Stacey at 5:11 PM 0 comments

We spend most of our time trying to promote all the good cultural, architectural and historic moments happening in San Jose. But we also have walking tours to help tourists and expats alike see the real gems of San Jose. Attached is a video to give you an idea of this very unique way to see the beauty of the city. If you've been scared or annoyed by it until now, it's the perfect time to change.


Barrio Bird offers walking tours of San Jose. If you are a visitor or have lived here for some time, there is always a new way to see the city. View tours or make a reservation by emailing barriobird@gmail.com or calling 8926-9867.
Posted by Stacey at 2:47 PM 1 comments

Two art installations currently on display in downtown San Jose, Costa Rica explore the ideas of hope, it's virtues and shortfalls, and showcase an artist's journey in textiles. Both invoke thoughtful conversations and inspiration to explore our own surroundings as art.


+/- Esperanza (+/- Hope) is on display at the Museum of Contemporary Art and Design (MADC). 28 artists from Central America and the Carribean explore ideas of Hope. Surprisingly, some of these pieces looked at hope from an anxious or deathly perspective. I think these add a level of depth to the entire exhibition.

My personal favorite is the first photo below. Outside of the Jade Museum, It quotes a very famous Costa Rican writer and poet, Isaac Felipe Azofeifa Bolaño, of which translates to, "Yes, child. The stars have parted, but it never becomes more dark than just before dawn." I find the quote especially appropriate with the image because I've watched this moment many times now with the homeless scattered throughout San Jose. And as an outsider, it's a very dark moment where all you can feel is hope that everyone with less, could have more. 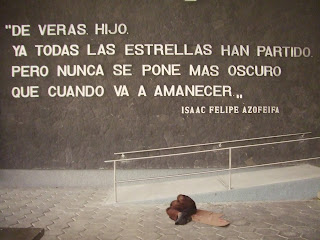 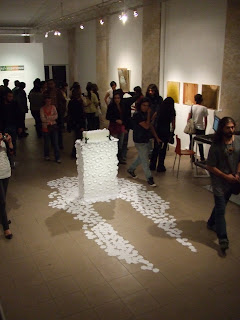 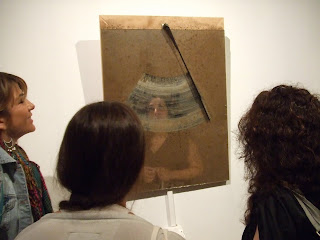 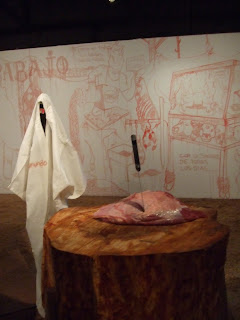 The National Museum is currently housing a garden of variety and beauty in it's once eery prison chambers. Metamorphosis. A New Cycle is an exhibit of textile art that transforms many fabrics, paper plates, coke tabs and more into displays that take the imagination for a spin. Costa Rican artist, Sylvia Piza-Tandlich, has worked with her community based artists to create these individual pieces that are strung together with threads and links to showcase some extremely impressive handmade pieces. The last photo shows the latrine that has parts of the ceiling from the old Municipal Theater. 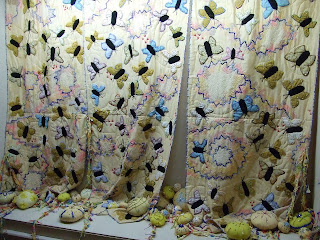 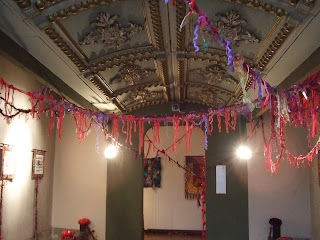 Barrio Bird offers walking tours of San Jose. If you are a visitor or have lived here for some time, there is always a new way to see the city. View tours or make a reservation by emailing barriobird@gmail.com or calling 8926-9867.
Posted by Stacey at 2:10 PM 2 comments

Thursday presents many options for visitors and expats to enjoy Costa Rican art and music, as well as works from Central American, Carribean artists. Start at 5 p.m. and enjoy for the rest of the evening.


Music to Close the Afternoon - Teatro Nacional.
The National Theater offers Thurs. early evening performances  for the low price of 1,000 colones. The Orchestra of the University of Costa Rica will perform from 5 - 6 p.m., and will be presenting the most notable and admired work by Italian composer, Antonio Vivaldi (1678-1741): The four seasons. Guest violinist,  Eva Liebhaber will join the group in this important Baroque period performance.


Art Opening, MADC, - La Esperanza (Hope)
The Museum of Contemporary Art will open its new exhibition this Thurs. at 6:00 p.m. Works of 28 artists from Central America and the Carribean will be on display exploring this very basic human emotion: Hope. We'll see an analysis of this concept, it's virtues, weaknesses and contradictions, stepping away from our everyday unilateral view of this simple, yet extremely complex experience.


All Star Concert of Costa Rican Musicians - Jazz Cafe, Escazu
Again, I don't usually cover Escazu, but the occasional event warrants coverage due to its significance to overall culture in Costa Rica.


Married musicians, Juan Carlos Ureña y Jeana Paul-Ureña will be performing songs from their new album, Space of Light. These 12 songs take a musical journey through sound, beyond political or geographical borders, are backed by some of Costa Rica's best musicians, and produced by vocalist, pianist and composer María Pretiz.


The couple will be joined by many of the artists recorded on this CD including 2 time grammy winner Wálter Flores and standout guitarist Bernal Villegas. Also in the lineup are Gerardo Mora, Marco Navarro, Checko D’Ávila, Óscar López Salaberry and singers Rocío Morera y Elena Zelaya. 5,000 colones, 9:30 p.m.

Barrio Bird offers walking tours of San Jose. If you are a visitor or have lived here for some time, there is always a new way to see the city. View tours or make a reservation by emailing barriobird@gmail.com or calling 8926-9867

To celebrate 60 years since the creation of the Central Bank, the Gold Museum now has bracelets, necklaces and earrings replicating the works of pre-columbian Costa Ricans. These images are certified with the museum and there is a 30% discount through August 15th. I find this type of gift more meaningful than some of the other traditional gifts we give to moms or family/friends back home.  They are sold at the museum gift shop. 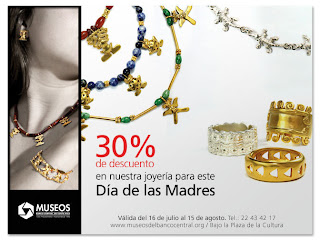 Barrio Bird offers walking tours of San Jose. If you are a visitor or have lived here for some time, there is always a new way to see the city. View tours or make a reservation by emailing barriobird@gmail.com or calling 8926-9867
Posted by Stacey at 2:52 PM 1 comments

THIS SITE HAS MOVED TO TOURSANJOSECOSTARICA.COM!