Two hostels have finally risen above the traditional hostel experience in San Jose, amplifying a tourist's experience before and after taking one of our cultural tours. We happily endorse a stay at both, each providing it's unique vibe and distinct advantages for travelers.

Hostel Casa del Parque - Best Savings in Low Season, Heart of Downtown
Hostel Casa del Parque should be your first hostel choice if you want to stay in the heart of the city in a safe place. It is located across from the National Park, providing green views, and is steps away from the Contemporary Art Museum, Congressional District, numerous other parks and historic barrios amon, otoya and escalante.
The hostel is in one of the last mansions to be built, 1936, from a family working in coffee production. Renovated to accomodate both the individual traveler and groups, this is an affordable location, that eliminates the hassles of driving or using public transporation in the city. A bar has recently been opened, and a cafe is on the way. This location is also across the street from the future visitor center & police substation.
Aldea Hostel - Best Location to Airport and Pacific Buses, Artist Hub
Aldea Hostel has opened with a unique hostel concept for San Jose. Set in a victorian style mansion over 80 years old, the hostel has been remodeled for those that want to visually enjoy their surroundings. Old chandeliers hang, lighting large exotic paintings admist zebra striped stairways. As the hostel continues developing it hopes to host music, readings and more cultural events in it's beautiful back patio space.
This hostel should be a top pick for those travelers arriving late or leaving early to the airport or Pacific Coast destinations.
We're excited to see both destinations continue to grow and diversify the services they bring to tourists, backpackers and the local community. Buena Suerte!

Barrio Bird offers walking tours of San Jose. If you are a visitor or have lived here for some time, there is always a new way to see the city. View tours or make a reservation by emailing barriobird@gmail.com or calling 8926-9867.
Posted by Stacey at 10:41 AM 1 comments

Pretty Things to See & Hear, Despite the Rain in San Jose, Costa Rica

A guitar festival and art openings will entertain this week. Good reasons for expats and tourists to get out despite the rain.

Art Opening at Museum of Contemporary Art & Design
Mudar el Piel: Karla Solano will open Thursday night at 7 p.m. The exhibition will take a look at the body, as a whole and individual parts. While this isn't a unique topic for artistic review, I hope we'll see some thought provoking pieces and not an overuse of nudity for shocking effect.

Opening at Des Pacio
Juegos Textuales: Miguel Imbach also opens Thurday night just down the street from MADC at 7:30. A video and then text will be read. This will all be in Spanish, but a good chance to see what some local artists are up to in San Jose.


Barrio Bird offers walking tours of San Jose. If you are a visitor or have lived here for some time, there is always a new way to see the city. View tours or make a reservation by emailing barriobird@gmail.com or calling 8926-9867.
Posted by Stacey at 11:34 AM 0 comments

Last week presented a flurry of international news about what probably seemed like a minor incident to a local business owner in San Pedro.


Published last Wed. by  Natalia Solorzano on her facebook page, her personal account of 'homophobia' in the restaurant La Buca swept virally across the Costa Rican social media network. Within hours the FaceBook Group, People Against La Buca was created and had hundreds of fans, and to date has over 1,200. Within a day, international news wires had picked up the story bringing Costa Rica's cultural tolerance of gays or lack thereof into global spotlight. Such articles here, Vanguardia, Carapicha (Costa Rica blog),and Generracion.com.


What was a supposed hug and kiss between two males, led the manager to ask a waiter to inform the couple this public display of affection was inappropriate. The couple's entire group decided to leave and then, bothered, asked to speak to the manager. The manager refused to come talk directly to the couple, dismissing them saying he was in a meeting, at 9 at night. The group, frequent visitors to La Buca, and frequent witnesses to the same unreprimanded heterosexual behavior at the location, felt it was an obvious display of discrimination.


Anti La Bucca supporters, also formed a campaign against Caffe Roma, believing they had the same owner. Due to the instantaneous rebellion against La Bucca, Caffe Roma was prompted to respond online with this response.


Initial response from La Buca was rather nonexistent, I think they were incorrectly overconfident in this not being a big deal. But after two days they met with the leader of the Movement for Diversity, trying to establish that this was not an act of discrimination, but a an act of policy of which all patrons are held to.


Leader, Abelardo Araya seemed satisfied with La Buca's response, but these events bring about a few items of note; the new power of social media that has arrived in Costa Rica and the need for businesses here to be active and aware of what is being said about them amongst online communities, the notion of Costa Ricans accepting gays vs. actually accepting them, and how that battle will play out as Costa Rica moves forward with legally accepting gays by granting civil union rights to gays.


The overall online response to the situation speaks to the strength of voice Costa Ricans can give to the battles for the cultural and legal acceptance of gays in Costa Rica.

Glam, Glitz and Community This Friday

There’s nothing like the glitter and excitement of opening night and it’s going to be even more colorful this Friday at the opening of The Birdcage with a fabulous gala and silent auction following on at the nearby Hotel Ambassador (Paseo Colon, Calle 26/28).
This wonderful extravaganza has been adapted for the LTG stage by Andrew Gardener, and is a charming blend of The Birdcage and La Cage Aux Folles. Musical numbers have been added iterspersed with the story to give a well rounded tale of two Jewish, middle aged gay men who run a night club in South Beach, Florida. Their son, the product of one night of romance with a straight woman, wants to marry the daughter of a moral and upstanding Senator. Fun and laughs ensue when the couple must play it straight to impress the daughter's parents.
The Gala after the first performance of the Little Theatre Group comedy, The Birdcage, will benefit Open Arms Costa Rica, a non-profit charity serving the children of Costa Rica. Tickets are ¢8,000 which includes beer, wine and goodies.
The Birdcage opens at the Laurence Olivier Theatre, Av. 2, Ca. 28. The Gala starts right after the show just one block away at 10 p.m., Friday, Sept. 17. For info and reservations, call 8858-1446 or visit www.littletheatregroup.net <http://www.littletheatregroup.net/>
Rehearsals of this show were fantastic, and the sets and costumes are stunning, can't wait to see the final product! 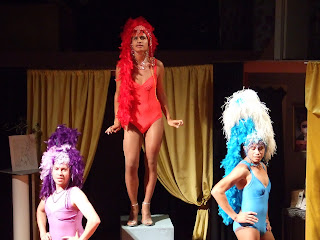 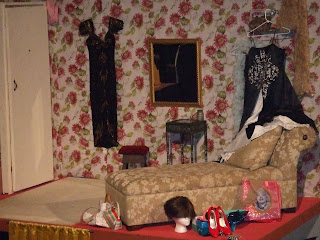 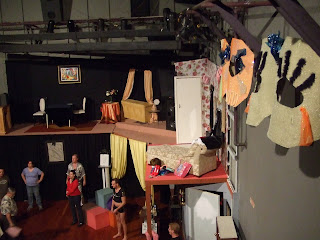 Japan meets Costa Rica in a Flurry of Art

Music, dancing and art were wound together, and topped with latin and asian eye candy last night at the opening of  'Zentica'.The Costa Rica Musuem of Art brought the two cultures of Japon and Costa Rica into the same space at Casa del Cuño, at the newly remodeled, La Aduana.


40 pieces, 20 Costa Rican and 20 Japanese, include sculptures, jewelry, paintings, videos and more. It is very interesting to see the differences between the artwork of the two nations. Overall, the Costa Rican pieces seem to work more with pastel colors, blending images, and taboo topics. The Japanese pieces were simple, yet bold, using solid colors, and almost alway integrating or dipicting natural elements such as birds, flowers,  wood, etc. It's all worth checking out yourself.


Guests were entertained by a number of live art performances. Artist Kazunobu Yanagi, painted while a band played an electric rock/meditation type of chant. Later, 4 women performed live dance as they simultaneously did larger than life oragami folding. 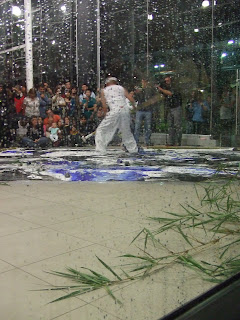 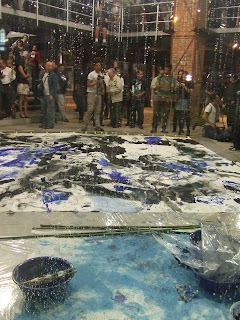 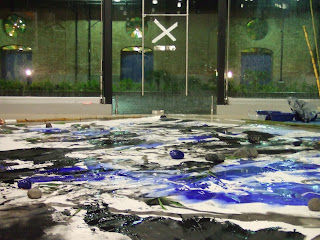 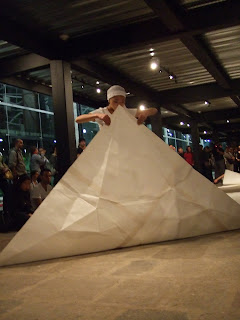 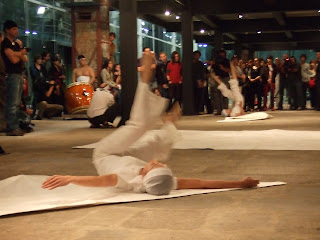 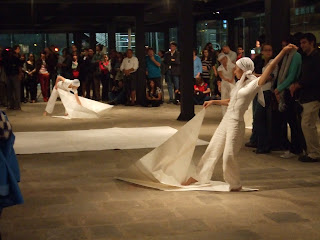 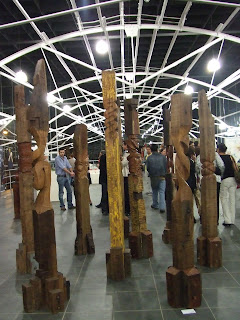 Barrio Bird offers walking tours of San Jose. If you are a visitor or have lived here for some time, there is always a new way to see the city. View tours or make a reservation by emailing barriobird@gmail.com or calling 8926-9867.
Posted by Stacey at 9:39 AM 2 comments

THIS SITE HAS MOVED TO TOURSANJOSECOSTARICA.COM!